Faster than the light!

Relativity theory proves that the speed of the light, equal to 299792,457 km/s, cannot be overpassed: to do so means that the resulting energy would be infinite.

On September 23rd of 2011 have been published the CERN results.
"I didn't expect this at all, we spent 6 months to redo everything" explained on Thursday Dario Autiero, member of the Physical Nuclear Institute of Lyon and responsible of the measures of Opera.
Franco-Italiano research teams have tested and re-checked their measures on over 15,000 neutrinos during 6 months before publishing the results.

These show that neutrinos, sub-atomic elementary particles, so tiny that they cross everything even planets like Earth, go at 6km/s faster than light.

American teams study now on a new experimentation that has a precision with an accuracy never reached before, thanks to the Minos project, between the Chicago Fermilab and a mine close to the canadian bordure. It would give results before three years, from Stavros Katsanevas and would confirm the european results.

Einstein has found a more general physical law than Newton's one, that was correct until the speed was beeing slow compared to light's one (non relativist speed).The way that is starting to be opened today is that a more general than Einstein's law might exist.

Scientific teams all around the world, using always more powerfull tools, work in this direction since decades, to find what is named the "All Unified" law that puts together the 4 forces: gravitation, weak and strong forces, and electromagnetism. 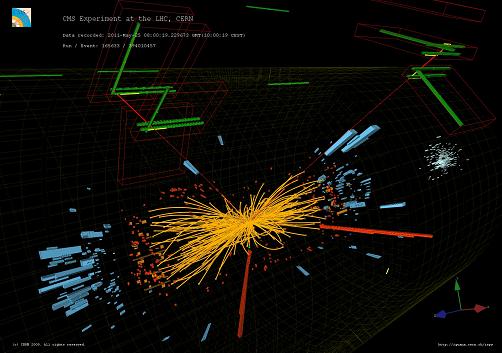 Example of works done in the LHC - Illustration only
CMS-PHO-EVENTS-2011-007 1
Event display of a candidate ZZ event,
in which one Z decays to two electrons (green towers)
the other to two muons (red lines).