To celebrate the detection of the 700th exoplanet and its recording in the encyclopedia of the extrasolar planets (http://exoplanet.eu/), we have joined Jean Schneider, astrobiologist in the Paris-Meudon Observatory and he has accepted to answer to our questions:

GT: Bonjour Jean Schneider, how do we become astronomer: which scolar cursus have you followed, which skills are required?

JS: Bonjour, I have done Maths studies. This science is as usefull to astronomers as oil is currently mandatory for cars. Great astronomers in the history are also great mathematicians. Kepler laws, that we learn in highschool, are a very good illustration.
To become astronomer, it is necessary to study deeply mathematics, and also physics, because the astronomy is now the astrophysics which is dedicated to the sky understanding. This is the way I have followed. I have finished my scholarship doing a thesis on the fondamental particles at the CERN.
I am now astrobiologist in the Paris-Meudon observatory.

GT: The discovery of the exoplanets is a department of Astronomy that meets an important success since its beginning 2 decades ago: what are the main subjects of this science ?

JS: Another important one is the comprehension of the black matter and the black energy.
Teams of astronomers, worldwide, have estimated that the only matter of the stars is not enough to allow them turning around the galactic centers. An important measure has been done on star clusters: the stars have been counted quite precisely and calculs have shown that the gravitation generated only per the bright elements were insufficient. Teams try to find what is this energy that we don't see and hence what we call the black matter.
The question stays since the years 1930s.
And about the black energy, this is a repulsive energy that stays in important distances and that we should add to the gravitation force (and hence to modify a little bit the Einstein theory) to explain the acceleration of the expansion of the Universe discovered since about a decade.

GT: Can we say that the Astronomy puts together Mathematics, Physics, Pictural Arts and Adventure ?

JS: Yes, with no hesitation.

GT: In this case, do you see yourself as a "ProfAdventurer", a science adventurer as was saying Pierre Kohler in his book published in 1985 ?

JS: I haven't red his book but yes, I am an adventurer, an inventor, an explorator.
Freud also considered himself as an adventurer.

GT: What do you like so much in this search of so small objects that are the exoplanets ?

JS: The hope of finding one day a life. But surely under a totally unexpected form.
There are so many stars, so many planets around them that there is certainly a life somewhere else.
Look at the NASA for instance who discovered one year ago a life form in a location plenty of arsenic, on Earth where life usually exists only with the fundamental elements CHON (Carbon, Hydrogen, Oxygen, Nitrogen). All our hopes are hence allowed.

GT: Some scientists already discuss about technics that are dedicated to detect possible lights on continents of these so far objects that are the exoplanets.

JS: Yes, I have been the first, I think, to publish this in "Astrobiology".

GT: Will future space telescopes such as Herschel totally change this research ?

JS: No, Herschell does not fit to these requirements (too small, not the right wave lengths). We will need to wait at least a 100m wide telescope to be able to do that.

Thank you Jean Schneider and good luck in your work. 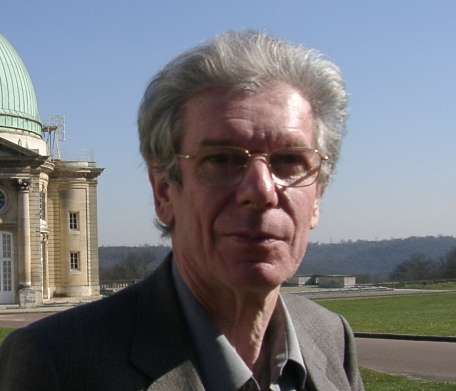 Jean Schneider in front of the Paris-Meudon Observatory