Bacteria made with Arsenic : denial!

We published an article on December the 6th, 2010 on a sensational discovery: Felisa Wolfe-Simon and her NASA colleagues had isolated the bacterium GFAJ-1, from Halomonadaceae familly, bacteria that was found in 2010 in an environment saturated with arsenic, the Lake Mono in California.
Click here to read the article from 2010.

Quickly after this discovery, it has been thought that this bacteria was made with arsenic in its DNA

This discovery should have been very important in the field of astrobiology.

Research teams have since had access to samples and it appears that arsenic is not a component of its DNA, according to Tobias Erb (ETH Zurich, Switzerland), Marshall Louis Reaves (Princeton University, USA) and their colleagues.

Any form of life known until today is using carbon, oxygen, nitrogen, hydrogen, phosphorus and sulfur.
It has been measured by scientists enough level of phosphorus that allows bacteria to grow.
Bacteria GFAJ-1 joins hence the class of extremophiles, which includes living organisms in absolutely extreme conditions. 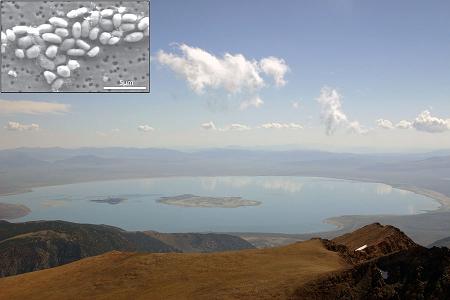