Curiosity will land on Mars on August the 6th, 2012

Remember!
Genius Tour covered on November the 25th, 2011 the takeoff of Curiosity, the latest Mars probe from NASA.
This previous article available by clicking here shows the evolution of the impressive size of the probes sent to Mars by NASA since Sojourner.

About eight months later, the probe passed through the space and comes close to Mars!
It must land on August the 5th at 22:31 Pacific time, which should be around 10:31 in the morning of Paris time, on August the 6th.
This science lab, which cost $ 2.5 billion, has already its first goal: primary objective is to land properly.
Indeed, this is the first time that an unmanned probe so heavy is going to land on Mars.
The scenario of the descent is as follows:
1- The Martian atmospheric friction will slow the spacecraft from 13000 to 1000 mph and its shield will reach a temperature of 3800°F (2100°C). The Martian atmosphere, which is much less dense than Earth one, is not able to slow the probe more than that;
2- A 60-foot diameter supersonic parachute deploys and inflates above the capsule on 160-foot lines and automatically supports a load of 30 tons. This is the largest parachute ever deployed on another planet;
3- When the fall speed reaches 200 mph, the explosive belt that holds the science lab frees the Sky Crane and Curiosity. During one second it drops, and then eight retrorockets fires;
4 - The speed of the descent decelerates to reach only 1.5 mph;
5- When the Sky Crane is at only 60 feet above the Martian surface in the area of the Gale crater, then three 20 feet long nylon ropes maintain the probe under Curiosity. The Sky Crane maintains the speed of its descent until Curiosity is resting on the surface.
6- At this point, explosive bolts release Curiosity from Sky Crane, that moves away to crash further on the Martian ground, once its successful mission is done.

the 5mn NASA's video accessible through the link here below shows how the mission is planned by the scientific teams. 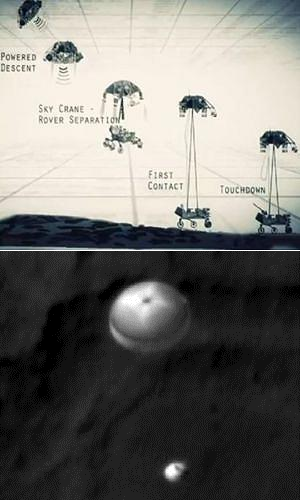 Copyright NASA
Curiosity Spotted on Parachute by Orbiter
NASA's Curiosity rover and its parachute were spotted by NASA's Mars Reconnaissance Orbiter as Curiosity descended to the surface on Aug. 5 PDT (Aug. 6 EDT).
The High-Resolution Imaging Science Experiment (HiRISE) camera captured this image of Curiosity while the orbiter was listening to transmissions from the rover.
Curiosity and its parachute are in the center of the white box; the inset image is a cutout of the rover stretched to avoid saturation.