The project
In November 1985, Mikhail Gorbachev, General Secretary of the Communist Party of the Soviet Union, the Nobel Prize Peace in 1990, after meeting with French President François Mitterrand and British Prime Minister Margaret Thatcher, has proposed to U.S. President Ronald Reagan to implement an international program to develop fusion energy for peaceful purposes.

7 nations representing more than half the world's population gathered between 1985 and 2005. It is the European Union (through EURATOM), the Soviet Union, the U.S. and Japan in 1985, China and the Republic of Korea in 2003 and finally India in 2005.
The ITER design was ratified in 2001 and the phases of construction, operation and decommissioning of ITER as well as financial aspects, organizational and human were identified in the Joint Implementation Agreement.
ITER Members have agreed to participate together in all aspects of the program: scientific research, procurement, finance, human resources, etc.. so that each may have, ultimately, know-be required to build their own fusion power plant.

On the 28th of June, 2005 was unanimously accepted the site proposed by the European Union: Cadarache, near Aix-en-Provence (Bouches-du-Rhône).
On November the 21st, 2006 was signed in Paris the creation of a the legal entity to manage the various international phases of the project.
In February 2007, the European Atomic Energy Community (Euratom) and the Government of Japan signed an agreement called "Broader Approach" agreement helped launch three projects:
- Materials testing, experiments
- Advanced simulations of plasma
- Establishment of a design team responsible for the study of a reactor called DEMO to succeed the ITER machine.

The Tokamak
It is the largest magnetic confinement of the planet. Its purpose is to confine the plasma which is a mixture of deuterium and tritium (two isotopes of hydrogen) in a vacuum chamber in a ring shape. This plasma is heated to more than 150 million degrees and is held away from the walls thanks to a magnetic field that is generated by superconducting coils. For comparison, the calculated temperature at the heart of the Sun is 15 million degrees.

The assembly
One million pieces assembled in an assembly drawing which includes no less than 18,000 lines and requiring more than 1.5 million hours of work over 4 years will allow the Tokamak starting running by 2019.
The machine will be assembled in clean rooms where the temperature and the humidity will be constant for avoiding dimensional changes of the biggest components.
To allow convoys to move 900 tonnes at the same time, 25 sites on 104 kilometers of infrastructure are being established between the port of Pointe where the elements of ITER are landed after crossing the Etang de Berre on barges and the construction site.

Fusion and operation of the tokamak
Two hydrogen nuclei collide, fuse into heavier helium atoms and release tremendous amounts of energy in the process.
Here, the fusion between deuterium and tritium (D-T) will produce one helium nuclei, one neutron, and energy.
The helium nucleus carries an electric charge which will respond to the magnetic fields of the tokamak and remain confined within the plasma. However, some 80 percent of the energy produced is carried away from the plasma by the neutron which has no electrical charge and is therefore unaffected by magnetic fields. The neutrons will be absorbed by the surrounding walls of the tokamak, transferring their energy to the walls as heat.

In ITER, this heat will be dispersed through cooling towers. In the subsequent fusion plant prototype DEMO and in future industrial fusion installations, the heat will be used to produce steam and—by way of turbines and alternators—electricity. 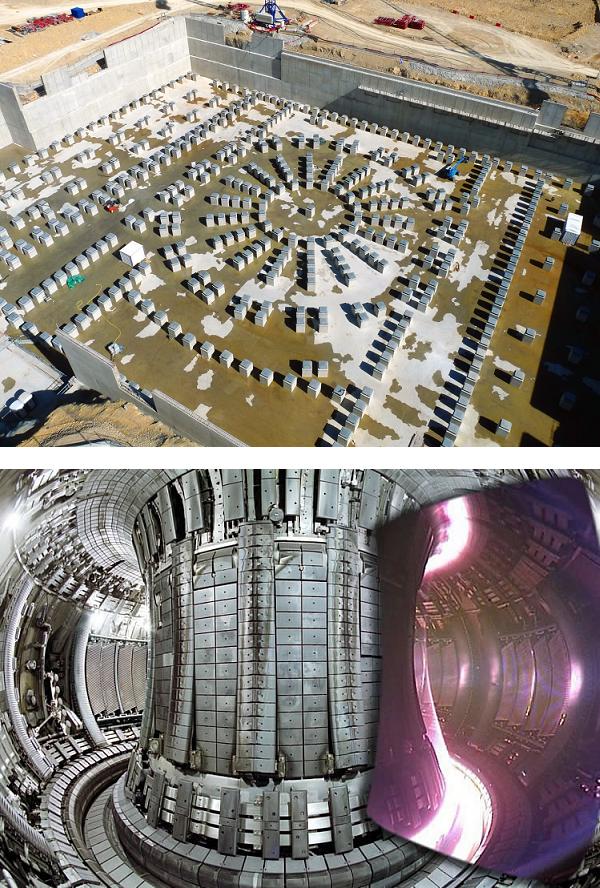 Iter - 493 parasismic plots - April 2012, Copyright ITER Organization
Inside the European JET Tokamak, both before and during operation. Photo: EFDA, JET.