Its reentry initiated an intense flash of light followed by violent explosions (the sonic boom and explosions due to the partial disintegration of the meteorite at altitudes between 30 and 50 km) sprayed numerous windows and brought down a wall plant.

Attracted close to the windows to understand what was due to the flash of light, more than 1,000 people were injured because debris glasses were projected at the time of sonic boom a few seconds after the flash of light.
20,000 soldiers have reached the city sent by Vladimir Poutine to avoid panic. Note also that the temperature is below -18°C at this time of the year.

A hole of more than 6 meters diameter was found in an icy lake located about 70 km west of the city of Chelyabinsk.

Moving north-east to south-west, it seems that the meteorite had a mass of about fifty tons before entering the atmosphere and it is fragmented into numerous parts.

This is the very first time such an event is experienced.

As comparison, the one filmed over Cusco on 08/26/2011 had done no damage (Click here to see this asteroid entering the atmosphere).

This event coincides to the observation of the asteroid 2012 DA 14 coming from a different region of the sky.
This one is much bigger, as it measures 45 meters long and has a mass of 135,000 tons.
This asteroid was followed by most of the observatories of the world because it was close to Earth at 8:30 p.m. French time and has come to an altitude of only 28,157 km (reminder : geostationary satellites are in an altitude of 36,000 km).
At 9:05 p.m. French time, NASA said on its Twitter account that the asteroid was gone (see its picture in this page).

Note finally that the orbit of the asteroid Apophis was recalculated at the beginning of 2013 and it has been established that it won't hit Earth in 2036 (See article dated 08/24/2011 on Genius Tour). 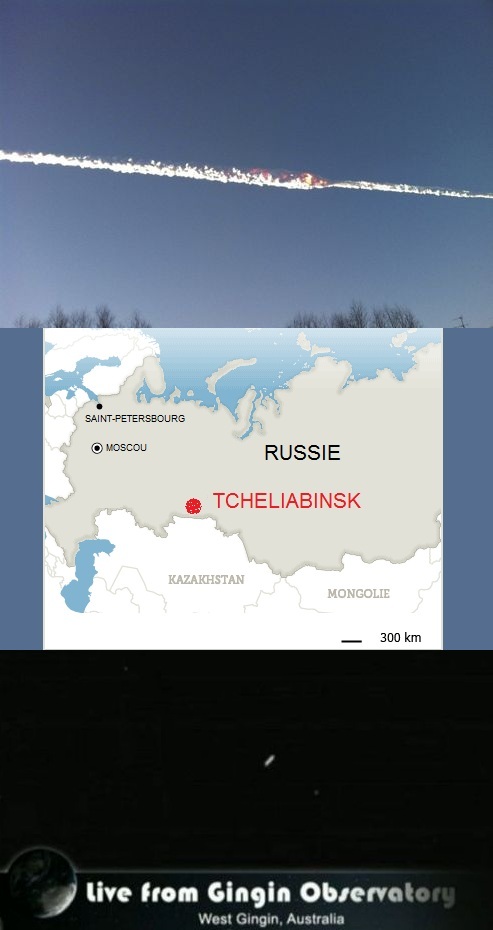