The history of the development of an artificial heart began in 1967, when Dr. Kolff inaugurated the Artificial Organs Division at the University of Utah.

He made many experiments between 1973 and 1981, and the most notable are transplants of artificial hearts on calves and on a bull, that lived after their transplant, at first during 30 days and up to 268 days with the Jarvik 5.

- In 1969 however, the English Dr. Denton Cooley puts the first total artificial heart in a dying patient who stayed attached to a device weighting more than 250kg and remained connected for 64 hours while waiting for a human heart from a donor.
However, the patient did not survive the next transplantation with a real heart taken from a donor due to a lung infection.

- In 1982, the team of Dr. Kolff implemented Jarvik 7 artificial heart on a patient who survived difficultly for 112 days, attached to a device weighting more than 100kg.

- In 2000, at the Pitie Salpetriere in France, a team transplanted an artificial left ventricle to a 72 years old patient, who could then move carrying with him a backpack containing the battery.

- In 2001, an American team transplanted a plastic and titanium prototype to a patient. However, the batteries of the AbioCor system have a life quite low (a few hours) and the artificial heart can’t work more than two years.

- In 2008, the team of Professor Alain Carpentier makes CARMAT, a self-regulating device made with biocompatible materials, which automatically adapts to the needs of the patient and prevents transplant rejection by immune rejection.

- On December the 18th, 2013, the first autonomous artificial heart is implanted at the HEGP (Hospital European Georges Pompidou) in Paris by Professor Daniel Duveau and Christian Latremouille under the direction of Professor Alain Carpentier, the project designer.

Over 450 artificial hearts have been implanted worldwide between 1696 and 2010.

The revolution brought by the CARMAT heart is to bring a long term solution. Previous systems were only palliative pending a transplant from a donor; CARMAT is an autonomous system for patients with terminal cardiac assistance which aims to address the shortage of hearts graft and provide a solution to cons-indications for transplantation.
Currently (2014), the French National Security Agency of Medicines (MSNA) authorized CARMAT (GIE Carpentier-Matra) to implement 4 patients. 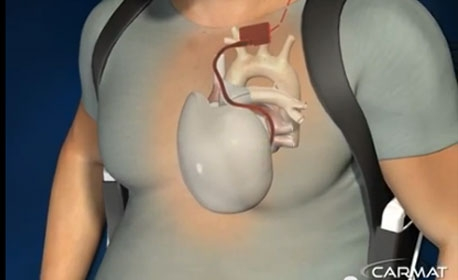