Discovery of the Gravitational Waves

March the 17th, 2014, a team of mainly American astronomers led by John Kovac, of the Harvard-Smithsonian Center for Astrophysics announced the discovery of the "primordial gravitational waves" !

This extraordinary discovery lies in the fact that it has been demonstrated in the General Relativity theory published by Einstein's in 1915 but it had never been observed.
It is extraordinary because it is accompanied by the observation of the first echoes of the Big Bang!
Finally, it is extraordinary because it is a fundamental step in the theory of the "Grand Unfied Theory"! (Grand Unified Theory explained in Wikipedia)
As a reminder, this theory brings four forms of energy in the universe, namely the strong force, the weak one, the electromagnetic one and the gravitational one.

The team of astronomers has installed a small telescope (about 30cm diameter) in the U.S. Amundsen-Scott base in Antarctica, where the sky is among the purest in the world.
The telescope, called Bicep 2, observes the millimeter radiation area where the cosmic rays are the most brilliant.

This discovery, if it is confirmed open a huge physics and cosmology study field looking to write the theory of quantum gravity and canceling many cosmological and physical theories.
It could also validate the theory of American physicist Andrei Linde of Russian origin which explains why inflation and the Big Bang are one and the same phenomenon, " the eternal self-reproducing inflationary universe”, why the big bang and our cosmos are states in a random layer of eternal and infinite multiverse in which quantum fluctuations would generate spontaneously from time in an ever expanding universe.

The picture shows a network of black lines superimposed which is, according to cosmologists of 2 Bicep collaboration, imprint of primordial gravitational waves emitted at the big bang.

They describe fluctuations seen in systematic observation of the same region of the sky for several months (small part of the sky in the southern constellation of the Toucan, ie in the direction of the galactic south pole). 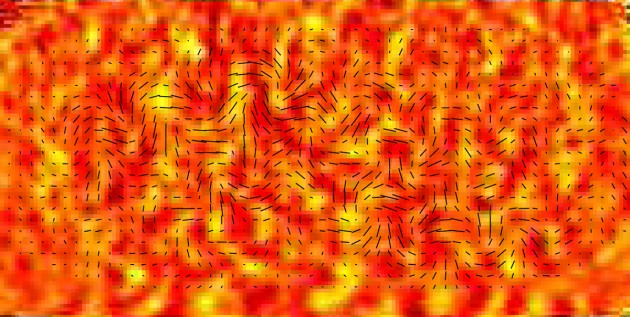