On November the 12th, 2014:
Successful rendez-vous between the Rosetta probe and comet Churyumov-Gerasimenko

On November the 12th, 2014, Rosetta a sent its robot Philae on the core of the comet 67P/Churyumov-Gerasimenko to analyze its chemical composition.
Launched on March the 2nd, 2004 by an Ariane 5G+, weighting 3 tons, Rosetta followed a path around the Sun for 10 years, using the slingshot effect of the planets and using small engines: Venus was crossed to increase the speed of Rosetta in June-July 2004 and Earth in March 2005, Venus again in September 2006, Mars in February 2007, the Earth again in October-November 2007 and then again a third time in October-November 2009. Rosetta decreased a little bit its speed by Mars in February 2010 to finally take charge of the comet and get closer, less than 40 million kilometers at the level of the orbit of Jupiter in January 2013 and then at away from the comet 100km on August the 9th, 2014, more than 10 years after its launch.

The comet is 4km wide and has been approached by Rosetta at 836 million km from the Earth when there speed was only 11km per second, close to its peak, after a 6 billion kilometers journey long of the probe.

On October the 17th, 2014, it will be at 10km away from the comet.
Finally, on Novembre the 12th, 2014, at 2,5km away from the comet, the spacecraft will launch the robot Philae, that weigths 100kg, that will land on the comet and will use its instruments.
Philippe Gaudon, project manager in the CNES (Centre National d'Etudes Spatiales) on the European Rosetta mission has successfully testes since SONC building (Science Operation and Navigation Center at CNES in Toulouse, France) the 10 instruments that the probe carries, such as a drill and a spectrometer.

Starting from November the 12th, 2014, the comet will be accompany by Rosetta, accelerating like the comet as they approach the sun.
Thus, on August the 15th, 2015, they will be at 34,22km per second when they reach the perigee of their shared orbit, midway between the levels of the orbits of Mars and Earth.

What are the objectives of such an interplanetary mission?

Jean-Pierre Bibring, one of French scientists responsible of the mission, answers to this question: "We know little about these comets composed of 80% water ice, whom sublimation close to the sun causes the hair of the comet, but we found that they contain extremely black macromolecules carbon dating from the birth of the solar system. Their analysis can help to understand the processes from which life could arise".

Therefore in parallel to the analysis of samples collected and analyzed on site by the robot Philae landed on the comet, the probe Rosetta will conduct chemical analyzes of gases and dust from the comet tail.

The four main objectives of this space mission are:
- To know the main features of the nucleus of the comet, its dynamic behavior, its composition and morphology of the surface,
- The chemical, mineralogical and isotopic composition of volatile and solid core materials,
- Individuals and interactions between volatile and solid core materials,
- The development of the activity of the comet (degassing) and processes at the surface and in the hair (interactions between dust and gas).

During the first two days, from the point of landing defined at the beginning of October 2014 after obtaining an accurate map of the comet, the robot Philae will carry its 18 experiences.

4 months later, it is scheduled to be naturally destroyed by the heat of the sun. 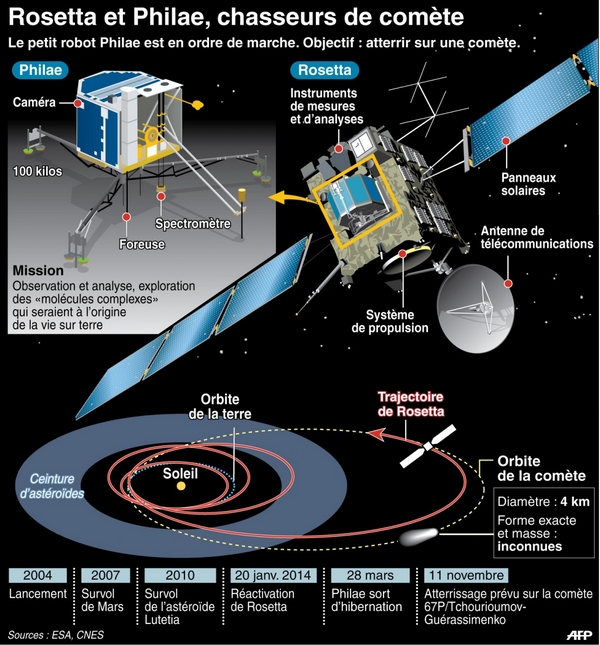