Launched by NASA on January the 19th, 2006 via an Atlas V-551 rocket, the 478 kg of the New Horizons probe just completed on this July the 14th, 2015 the first overview of Pluto never ever done before and send us the first images of this distant object in the solar system.

This probe passed close to Jupiter on February the 28th, 2007 to take advantage of the slingshot effect (natural acceleration done whilst approaching a planet along its orbit around the sun), photographed the dwarf planet Pluto and then will move to another body of the Kuiper belt that it will reach in early 2019.
Reminder: Kuiper Belt is similar to the asteroid belt between Mars and Jupiter: it is made of an estimated 70,000 small bodies (at least 100 km diameter) not partially agglomerated in the solar system (already a thousand is detected) and has at-least three dwarf planets: Pluto, Makemake and Haumea (The object named Eris is not part of the Kuiper Belt).

About Pluto, located at 5 billion kilometers away from Earth, we know that it has a thin atmosphere, has a diameter of 2380 km (the Moon one is 3474 km), its main satellite Charon, with its diameter that is only half size of Pluto one, always presents him the same face to the courtyard of his 6.4 days of duration of revolution, and it has (before the overflight of the probe) 5 known natural satellites.
Its two major differences from the 8 planets of the solar systems are: firstly its orbit is not in the same plane as the planets one; Secondly, Pluto-Charon pair is the only double planetary system of the solar system.

Sent with a rate of 1Ko/s in order to minimize energy consumption, pictures taken at 12500 km of the dwarf planet by the probe show the icy surface (-230°C) of this world; the measurements made by instruments aboard the space robot will tell us what are the elements that constitute its atmosphere, what is its morphology.
From these pictures, we already know now for example that Pluto has a mountain chain that is 3500 meters high, which shows that the dwarf planet has a geological activity, and that it is not covered with craters, and thus there is no bombardment of meteorites.

Analysis of the results that scientists will continue to receive for many months will allow us to better understand how the planets were formed in the solar system.

Click here will allow you to see the animated flyby of Pluto! 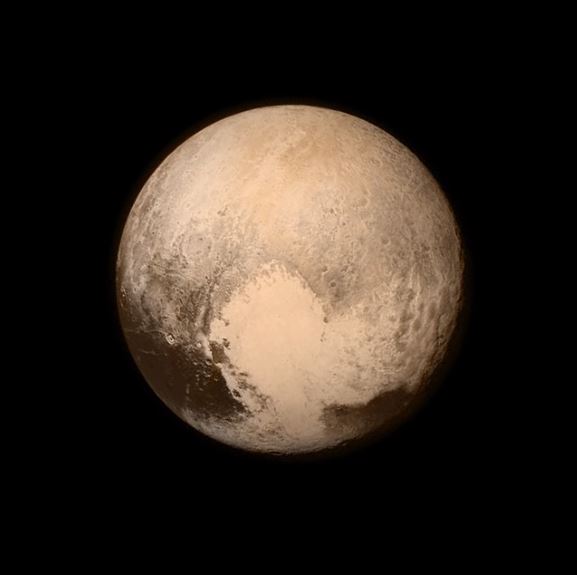