Discovery of a new Earth!
Interview of Jean Schneider

NASA just announced on July the 22nd, 2015 the discovery of a planet that would be similar to Earth.

Mission of Kepler space telescope that was launched into orbit in 2009 was to detect extra solar planets, which are also called exoplanets.
He fell partially down in 2013 but continues operating in reduced mode and the 4696 planets were discovered and listed before the two gyroscopes which stabilize it stopped functioning.

Discovered planets are sometimes gas giants ones, sometimes very hot or very cold telluric planets, too close or too far from their central star.
None at the moment seemed to be able to host life because either they are not in an area that can host life, that is to say that they are in an area where the temperature is tempered, or because they are made only with gas, or they orbit around variable stars...

This new exoplanet, called Kepler-452 b, is the best candidate among 12 selected ones:
- its radius is about 60% greater than the Earth one;
- it orbits around its star in about 385 days;
- its star is identical to the Sun that is is only 10% bigger than our star;
- Kepler-452 b is at a similar distance from its star than Earth to the Sun.
An important difference between the two systems is that this planet is older than the Earth: it is 1.5 billion years older.

You are astrobiologist at the Paris Observatory especially specialized in the discovery, identification and study of exoplanets.

GT:What do you think of this discovery?
JC: This is of course interesting.
But it's too bad they did not measure the mass of the planet, because of insufficient brightness of the star to make "radial velocity" measurements.

GT: What methods could be used to determine if chemical elements (CHON) that constituent life are present on this planet?
JC: Very clearly spectroscopy transits, i.e.to take a spectrum of the star during the transit. The light from the star passes through the atmosphere of the planet (which I think is likely to exist) produces spectral lines signing the chemical composition of the planet.

GT: Based on the assumption that Kepler 452 b is 1.5 billion years older than Earth, what can we learn from this planet?
JC: A priori that it is geologically more advanced than Earth, but that's all we can say. Above all, any assertion is difficult to prove before any long observations.

GT: How do you see evolving the search for exoplanets?
JC: We are in the Middle Ages of these discoveries, or even in Prehistory.
At the scale of a few thousand years, we will go there.
At the scale of a century, we can make mapping more precise (at best a few kilometers) of their surface (continents? oceans? .... cities?? ...).
At the scale of 30 years from now, we can take pictures of super-Earths close to us and and take a spectrum (not before 2040 following the current calendar of the European Space Agency -ESA).
From 2025, ESA Plato mission will make similar discoveries to those of Kepler, but for stars 50 times closer, hence much easier to study (mass, atmosphere ...).
From 2020, the James Web Telescope will be able to take spectra of super-Earths during their transits to study their atmospheres.


GT: Will the research for exoplanets go through space telescopes, by telescopes or gigantic telescopes networks on Earth, by both technologies, by the use of mathematical algorithms developed, or by using other technologies?
For example, US astronomers Amit Misra and Victoria Meadows from Washington University developed a technique to know if a planet has a clear atmosphere or not (research published in the journal "Astrophysical Journal Letters"). Their method is whether a halo of light is detected just before the transit of the exoplanet (for our readers, transit is the passage between the distant star and Earth). This halo of light increases the light before its reduction.
JC: This is an old idea. This requires that a photometric accuracy that Kepler does not have.
Perhaps Plato?

GT: This could be the case according to the brightness curve measured by the space telescope (see picture below, credit photo : NASA and Dana Berry)?
JC: The attached photo is from a video that is a simulation, not a real observation.
We do not see this increase in the transit curve from the picture taken from http://iopscience.iop.org/1538-3881/150/2/56/that I put you just at the bottom of the interview.
You can imagine that if they had seen this phenomenon they would have said it.

Thank you Jean Schneider for your answers after the announcement of NASA and I wish you an excellent continuation in your explorations.

P.Broage
To click here allows you to access the interview with Jean Schneider conducted in 2011 on the occasion of the detection of the 700th exoplanet. 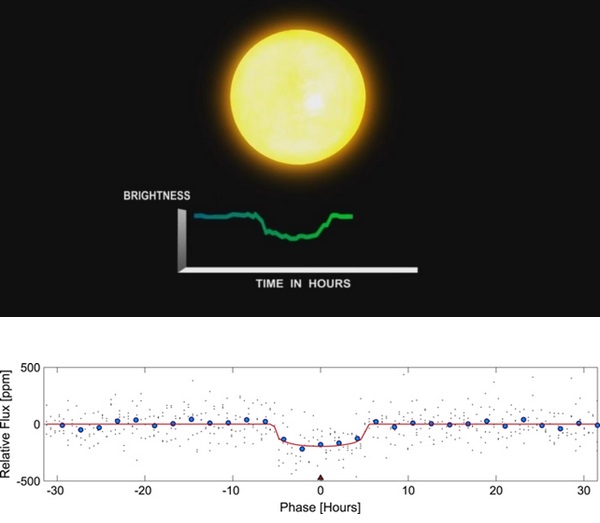